Kirkus Reviews Big Thumbs Up for WINE INTO WATER

It was declared in the review:

"The recurring protagonist shares the spotlight with many characters who appeared in preceding novels. This narrative approach, however, proves beneficial. To begin with, the story, though boasting the series' now-prerequisite action sequences, shifts most of its attention to the mystery. Keating establishes genuine suspects: seems all winemakers, from the respected to the dubious, are under attack, so those culpable aren't easily detectable. Grant undoubtedly shines in confrontations with baddies as well as lighter subplots: scenes behind the pulpit and his visible awkwardness whenever Caldwell and his wife, Jennifer, are together. But it's the search for killers that makes the biggest impact, and the pastor can't take full credit; it's a team effort, with characters (i.e., Grant's old CIA pals) that are just as essential.
"A first-rate mystery makes this a series standout, even if the titular protagonist splits his hero status with others."              - Kirkus Reviews 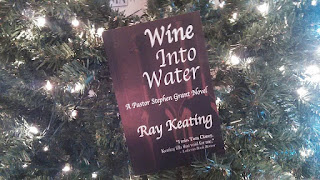