Years ago, some Washington wag rather aptly renamed the estate tax as the death tax. Sure, it was meant to gain an edge politically, but it also had the added virtue of being more accurate. After all, the “estate tax” name originally was used to score political points as well.

The death tax ranks as one of the strangest levies imposed by government.

The current death tax was imposed in 1916. Previous measures went back to the earliest days of our country – but were temporary. The 1797 Stamp Act, imposed to help pay for undeclared war with France, included taxes on the assets of the deceased, wills and bequests. Death taxes were inflicted during the Civil War, but were gone by 1872. And the Spanish-American War saw a death tax instituted from 1898 to 1902.

But the current death tax emerged from the Progressive movement’s emphasis on envy and class warfare, which always run contrary to sound economics.

As of September 2021, the death tax imposes a top rate of 40 percent with an exemption level of $11.7 million, and there are efforts afoot to increase taxes at death.

So, what’s the problem? There are several.

First, there is a basic issue of fairness. After paying many, many taxes over a lifetime, the death tax means that government shows up at death in order to impose a tax on total assets.

Second, a tax on total assets is not exactly good for investment and job creation. The levy discourages efforts to build up businesses, while also increasing the likelihood that firms will have to be sold or even closed. And consider that family businesses can be particularly vulnerable at the time of an owner’s death.

Third, resources are diverted away from productive efforts, and wasted on accountants and lawyers to find and set up ways to avoid death taxes.

Fourth, many studies have spelled out the broad negative economic effects of death taxes on investment, economic growth and job creation, and in turn also point out that once all of the costs and economic negatives are factored into the equation, the death tax winds up providing no benefit – that is, no net revenue – to the federal government.

Given these ridiculous realities of death taxes, we are left with returning to the idea that these levies are imposed simply out of the unsavoriness of envy and class warfare. Indeed, economics makes clear that death taxes shouldn’t exist at all.

Posted by Ray Keating at 3:01 PM No comments:

In recent times, it’s obvious that most people have come to know James Bond thanks to all or some of the 24 (official) Bond movies, with another (No Time to Die) on the way. Bond recognition has not, for the most part, been about Ian Fleming’s original books written in the 1950s and early Sixties. But I’ve long been of the opinion that to fully appreciate Bond, you need to read the books as well as seeing the films. 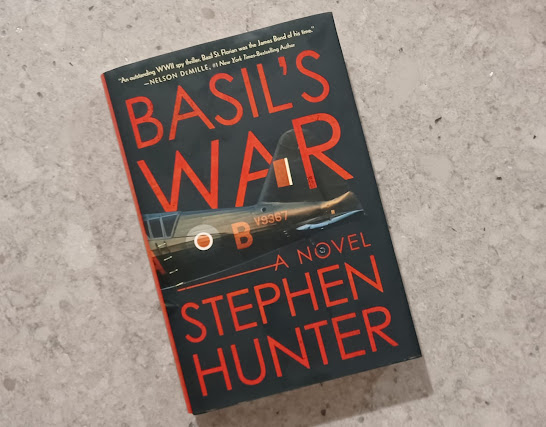 Keeping Bond in mind, perhaps it’s best to get to know Basil St. Florian now by reading Stephen Hunter’s Basil’s War before the character hits the silver screen or a streaming service. Do I know of any deal with a studio? No. But after reading Basil’s War, it seems like a natural leap from the pages of a book to the screen for the fun and fascinating St. Florian.

Hunter tells a ripping-good tale featuring a handsome, witty, ironic, alcohol-swilling British spy during World War II, who isn’t crazy about authority and beds assorted women, including Vivien Leigh. Basil St. Florian really does feel like James Bond, but at work in World War II rather than during the Cold War.

The story is a taut mystery, with Hunter deftly taking the reader along with St. Florian on a mission whose true nature is only gradually revealed.

For good measure, the author serves up some interesting secondary characters, and not just those on St. Florian’s side but even more so among his Nazi opponents.

And finally, like Ian Fleming did with James Bond, Hunter uses the advantages of a book to reveal background on and inner thoughts – including doubts and how decisions are made – of St. Florian. This provides the reader with greater character depth than is really possible with movies or television.

I advise people to read Fleming’s books to get a fuller sense of who James Bond is. They should do the same with Basil St. Florian by reading Stephen Hunter’s outstanding Basil’s War – before the character might land in Hollywood.

Posted by Ray Keating at 6:48 PM No comments: