The phrase “trickle-down economics” gained prominence as a derogatory phrase hurled at supply-side economic policies of the 1980s by political opponents of President Ronald Reagan. However, it actually has a longer history, going back at least to the 1920s, again, as a way of attacking supply-side-oriented policies. 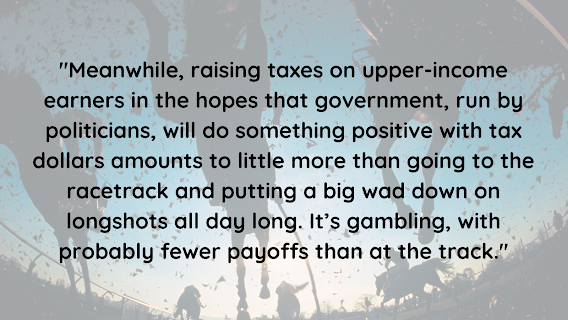 The trickle-down slur meant that across-the-board tax cuts benefited the wealthy at the expense of others, with perhaps a few benefits eventually trickling down to lower income groups.

The trickle-down attack gets dragged out time and again by those opposing tax relief and/or arguing for higher tax rates. For example, one member of a group of high-income individuals looking to raise taxes on themselves and other wealthy people, asserted in a recent op-ed at TheHill.com (“Why Biden's proposed marginal tax rate increase isn't enough”) that the “Reagan-era tax cuts and trickle-down economics … led to the massive income inequality that we see today.” How so? Well, that’s not explained, it’s just merely asserted.

I always find wealthy people who want to pay more in taxes, and demand that other high-income individuals pay more, interesting. Why? It’s clear that they love the idea of large government in a simple-minded way, while failing to grasp economic realities. For example, they completely miss the economic fact that wealthy individuals who invest or spend their own money will do far more for others than if those dollars were handed over to politicians and their appointees.

Think about it. Wealthy individuals have the resources to invest in new and/or growing businesses, and in turn, in creating goods and services desired or needed by others and employing people.

But what about the rich person who simply spends his money on forms of conspicuous consumption, like buying a bigger yacht? Well, who builds those yachts, and supplies the various materials and parts that go into such yachts? That’s right, it’s people up and down the income scale, including small business owners and their employees.

Indeed, high-income earners play a crucial role in the economy by accumulating wealth and thereby being able to invest in entrepreneurs, ideas and businesses, and therefore, in the investments, technologies and innovations that drive productivity, income and job growth. That’s not trickle-down economics. That’s just economics.

Meanwhile, raising taxes on upper-income earners in the hopes that government, run by politicians, will do something positive with tax dollars amounts to little more than going to the racetrack and putting a big wad down on longshots all day long. It’s gambling, with probably fewer payoffs than at the track.

After all, the incentives at work in government are not conducive to positive, productive outcomes. Politicians and bureaucrats spend other people’s money on programs and projects rooted in political incentives, and special-interest pressures and lobbying. For good measure, when something fails in government, the most likely result is that such failure is rewarded with more money and a larger staff.

Indeed, when you actually think about how government works, those who push for higher taxes and increased government spending – two central points of the Biden economic agenda – are engaging in true trickle-down economics. That is, dollars are sucked away from productive private-sector enterprises, handed over to politicians and their appointees, and one is left hoping that the economic damage will be limited, and that some sort of benefits might trickle down to the individuals that politicians presume to be helping. That’s all about politics, with little evidence of any economic thinking occurring.

In the end, supply-side economics is about providing relief from government burdens – such as through lower tax rates, reduced regulation and free trade – so that entrepreneurship, investment, and economic, income and employment growth can flourish. That’s the antithesis of trickle-down economics, or to use a different phrase, the antithesis of Biden-omics.

Posted by Ray Keating at 5:40 AM No comments:

Free Enterprise in Three Minutes with Ray Keating – Episode #109: Entrepreneurship is the Right Answer to Worries over “Big Business”

For those worried about big business, while pointing out that such concerns are unwarranted, Ray makes clear that providing a policy environment in which entrepreneurship can flourish is the response that makes the most economic sense. Tune in now!

On Entrepreneurship and Immigrants 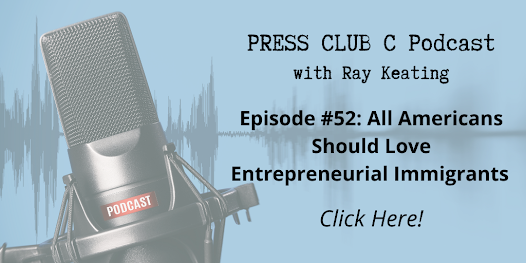 PRESS CLUB C Podcast with Ray Keating – Episode #52: All Americans Should Love Entrepreneurial Immigrants – Ray looks at the economic realities of immigration, particularly when it comes to immigrants as entrepreneurs.
Posted by Ray Keating at 5:46 PM No comments: 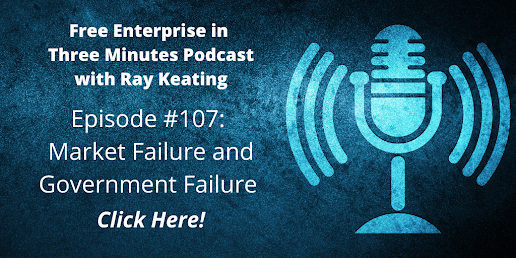 Posted by Ray Keating at 3:12 PM No comments:

If James Bond Became a Pastor 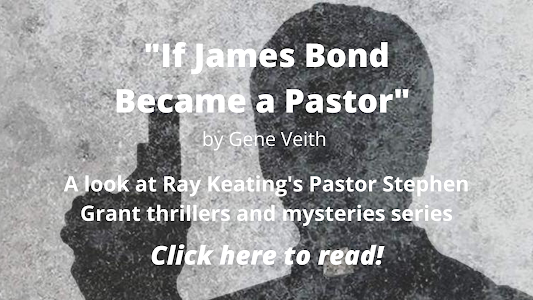 Posted by Ray Keating at 6:36 PM No comments:

A Bite of Business History: The Egg McMuffin Turns 45

This month marks the 45th anniversary of the national rollout of the sandwich that saved McDonald’s and changed fast food forever ... The Egg McMuffin.

Before 1976, it was almost unheard of in America to have breakfast anywhere but in your own kitchen. Cereal was the most popular choice. If you ran late and had to leave without sitting down to eat, you were pretty much out of luck.

In 1972, a McDonald’s franchisee in California came up with the idea of an open faced breakfast meal - his version of Eggs Benedict. McDonald’s owner Ray Kroc loved the taste, but wanted it made into a sandwich you could eat quickly and easily with one hand only. 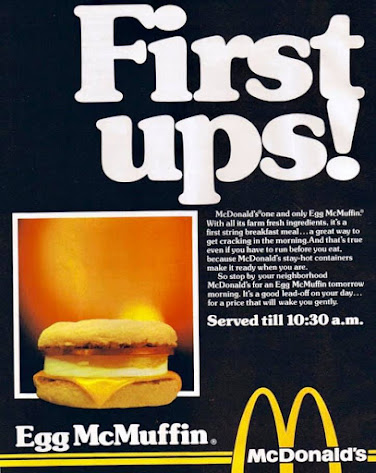 The company spent another four years getting it just right before introducing it across America. The Egg McMuffin (so named by Patty Turner) was a smash-hit classic right away.

McDonald’s sales had been lagging at that point, as more and more fast food chains opened up. They all generally didn’t start serving food until 11AM. The Egg McMuffin gave McDonalds a three hour jump start on the day. Competitors tried to match that.

Burger King - the first to copy McDonalds, with their Croissanwich - didn’t start serving breakfast until 1983, and everyone else followed them.

Today, breakfast sales account for more than 50% of fast food revenue. It’s estimated that one out of every four people eat a fast food breakfast at least once a week.

Though fast food is often thought of as unhealthy or overly processed, the Egg McMuffin is not so bad.

It’s made with a real egg that is poached and not fried. It has a small circle of Canadian bacon, a single slice of American cheese, and real butter. Together, this totals to 290 calories, 12 grams of fat with about six of those grams coming from saturated fat, 17 grams of protein (34 percent), and 29 grams of carbs (10 percent.) It’s also the only egg item on McDonald’s menu made with freshly cracked eggs from a shell, not processed.

McDonald’s, now one of the biggest mass purchasers of eggs in the world, finally made breakfast meals an all-day thing in 2015. As soon as they did, their sales doubled.

Amazing how a change of cultural habits can come from one simple idea.

Chris Lucas is an actor, writer, something of a cultural historian, and the author of Top Disney: 100 Top Ten Lists of the Best of Disney, from the Man to the Mouse and Beyond.

On the PRESS CLUB C Podcast, enjoy Ray’s recent discussion with Chris Lucas about his career as an actor, author and Disney expert. Tune in right here!

Posted by Ray Keating at 8:48 AM No comments: 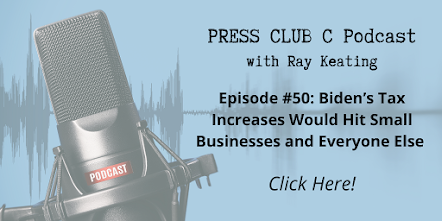 Ray explains why the negatives of the Biden tax increases would reach far beyond big businesses and the wealthy. Tune in now!

Posted by Ray Keating at 6:10 AM No comments: