Whether one writes books and articles, or simply Facebook posts and Tweets, a simple question must be answered: Why? Or, what’s the point? Why do you do this? 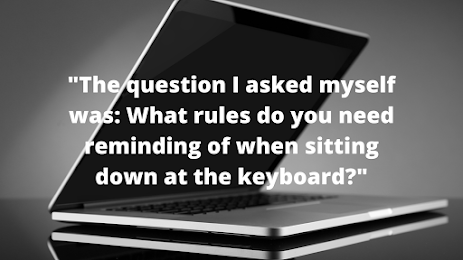 Now, if you’re just looking to vent your spleen and attack others, and that somehow that makes you feel better, then don’t bother with this. Get back to your important angry rants.

However, if you’re looking to actually persuade others, to try to help them see the truth, then perhaps consider the following “rules” for doing so. I jotted these down initially to help myself. I’ve been in the commentary/economist/analysis business for more than 31 years now, and things have changed, dramatically.

A big part of that change has been technological. The digital/computer/telecommunications/internet revolution has expanded opportunities, allowing more individuals, for example, to have their voices heard on wide-ranging matters. That’s great.

At the same time, the speed and immediacy of the internet, if you will, has meant that some things can be – and have been – lost, such as time for reflection in order to more deeply explore and more articulately express those ideas, as well as the diminished role, to the detriment of both writers and readers, of editors. Also, too many “experts” now possess ankle-deep, talking-points level of knowledge of issues upon which they spout off. That’s not so good.

These developments, along with an assortment of others in our culture, have led to an expansion of the us-vs.-them mentality – a return to tribal thinking. In fact, this has reached the point that large swaths of people simply assume that those they disagree with are unreachable – profoundly stupid and/or evil. That’s an unhealthy development, to say the least.

So, given that I write for a living – and I profoundly enjoy it – I have been thinking more and more about how to better engage people on ideas and issues. Over the past three decades, I have written some things that I would express in a different way or tone today, especially given the toxic, other-guy-is-just-evil mentality that has deeply infiltrated both the Left and Right today.

The question I asked myself was: What rules do you need reminding of when sitting down at the keyboard?

I came up with the following 12, and thought they might be worthwhile to others who work to engage, teach, criticize, and persuade others – from commentators and authors to pastors and priests to elected officials to those who just enjoy discussing policies and ideas, again, via Facebook or Twitter. These should be straightforward and self-evident, not in need of much expanded explanation. 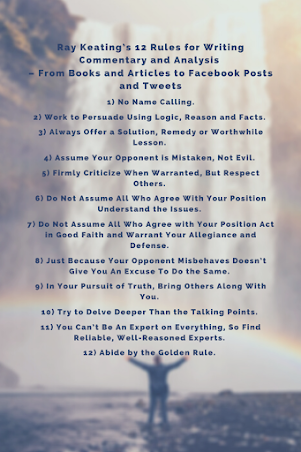 1) No Name Calling. After all, what’s the point?

3) Always Offer a Solution, Remedy or Worthwhile Lesson. I had a longtime editor who emphasized this, and it could be the most important lesson I learned for writing.

4) Assume Your Opponent is Mistaken, Not Evil. Assuming that someone who disagrees with you is evil is rarely productive. While there certainly are evil people in life, assuming that all of your opponents are evil ignores the more likely reality that, for a variety of reasons, they simply are mistaken.

5) Firmly Criticize When Warranted, But Respect Others. Yes, you can criticize and disagree with someone, and still treat that person with respect.

6) Do Not Assume All Who Agree With Your Position Understand the Issues.Particularly in recent years, I have had to learn this lesson.

7) Do Not Assume All Who Agree with Your Position Act in Good Faith and Warrant Your Allegiance and Defense. Watching allies on issues defend the indefensible because the indefensible has been perpetrated by someone on “our side” has been perplexing and discouraging – and it is an expanding plague in recent years.

8) Just Because Your Opponent Misbehaves Doesn’t Give You An Excuse To Do the Same. Hey, it’s simple: Don’t stoop down to the same unsavory level as your opponents.

9) In Your Pursuit of Truth, Bring Others Along With You. The ultimate point should be to bring light and truth to others.

10) Try to Delve Deeper Than the Talking Points. Perhaps it’s wise to refrain from spouting off confidently on something about which one knows little-to-nothing.

11) You Can’t Be An Expert on Everything, So Find Reliable, Well-Reasoned Experts.This is increasingly hard, but more essential, it seems, with each passing day.

I’m hoping that these rules will help me to be a more thoughtful, persuasive and productive writer, and perhaps you as well.

Also, tune in to Ray Keating’s podcasts – the PRESS CLUB C Podcast  and the Free Enterprise in Three Minutes Podcast

Get Notified by Email When a New Article is Posted!