Thankful for James Madison on His Birthday

Today, March 16, marks the birthday of James Madison, often called the Father of the Constitution. 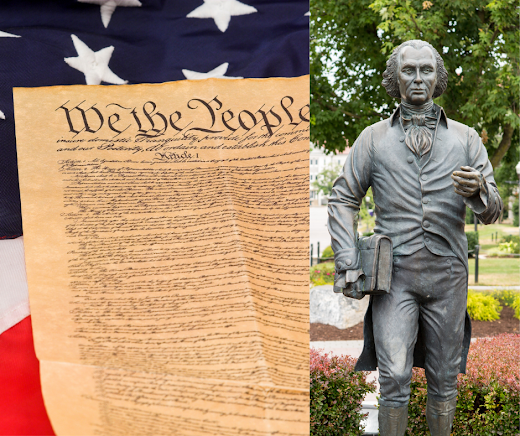 Madison was big on separation of powers, and checks and balances. And thank God he was. What the Founders created in the Constitution was truly exceptional (to be completed by Lincoln and the Civil War).

And looking at our current and previous two presidents, and far, far too many members of the current Congress, my appreciation for what Madison and the Founders achieved in terms of checks and balances, and separation of powers, has been multiplied many times over.

Perhaps Madison’s key point on these matters was the following:

Madison very much understood the need for checks and balances in government in order to protect liberty and limit the governmental abuse of power, no matter the source of such abuse. He understood the potential for abuse from those in government, as well as from the majority in a pure democracy. Hence, the Constitution is an exquisitely balanced document meant to protect natural rights, for example, as laid out in the Declaration of Independence.

As for government and policy today, we need to re-establish or regain what has been lost in terms of those checks and balances, and separation of powers. For example, Congress has been far too willing to hand over legislative powers to the president. Hence, we get Presidents Trump and Biden unilaterally imposing tariffs, while the power to tax is one of those separated powers allocated to Congress by the Constitution. And we see the Supreme Court grabbing the power to legislate from Congress because … well … too many justices simply want to go far beyond interpreting and applying what’s actually written in the Constitution. Judicial activism means the judiciary expands its power.

I think it’s safe to say that Madison would be appalled by all of this, and more.

Do we need another James Madison? No. We just need people in public life who have a Madisonian appreciation and understanding of the Constitution, government and human nature.

In addition, get organized in 2022 with either of Ray Keating’s TO DO List Solution Planners – The Lutheran Planner 2022 or The Disney Planner 2022.