August 24th Marks Celebration of the Festival of St. Bartholomew, the Apostle

If you don’t already have it, I heartily recommend picking up a copy of Celebrating the Saints: The Feasts, Festivals and Commemorations of Lutheran Service Book by William Weedon. It’s a wonderful devotional. 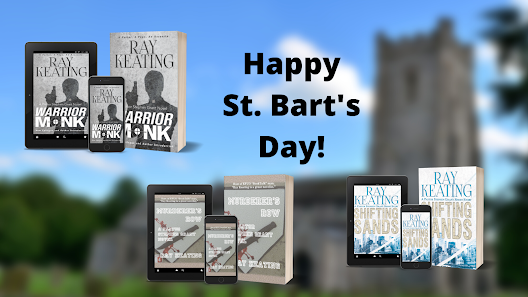 For August 24th and St. Bartholomew, Weedon, in part, writes: “St. Bartholomew (also called Nathanael) was one of the first of our Lord’s disciples. His home was in Cana of Galilee, where the Lord performed His first miracle. According to St. John’s Gospel, Philip sought to introduce his friend to Jesus in Judea. Nathanael was more than a little skeptical about a Messiah who hailed from the town of Nazareth (a town not even mentioned in the Old Testament). But Philip urged him, ‘Come and see.’ He did, and as so many have done since, he left a changed person.”

In the Pastor Stephen Grant books, Father Tom Stone is the rector at St. Bartholomew’s Anglican Church. Here’s a description of the church from Warrior Monk: “St. Bartholomew’s Church itself was a beautiful, historic stone building that resembled a mini-castle. Another building comfortably housed church offices, a large room for congregational meetings, dinners and events, classrooms and storage. And the large, six-bedroom parsonage was made of the same materials as the church. All of this sat on four acres on a lake in Eastport.”

And as for Father Stone, here’s the quick rundown: “A priest and rector at St. Bartholomew’s Anglican Church on Long Island, Tom is one of Grant’s closest friends, and served as Stephen’s best man. He enjoyed surfing while growing up in southern California, and is known for an easygoing manner and robust sense of humor. Along with Stephen, Tom and other friends regularly meet for morning devotions and conversation at a local diner, and often play golf together. Tom is married to Maggie Stone, who runs her own public relations business. They are the parents to six children.”

Oh, yes, on days when the temperature hits at least 50 degrees, and when not in clergy attire, Tom is known for his Hawaiian shirts (much like the person who created this character!).

Ray Keating is a columnist, novelist, economist, podcaster and entrepreneur. He is the author of the Pastor Stephen Grant thrillers and mysteries, and the Alliance of Saint Michael novels; and assorted nonfiction books. Have Ray Keating speak your group, business, school, church, or organization. Email him at raykeating@keatingreports.com.