What’s Next for Bond, James Bond?

While we wait for the announcement of who will next play British secret agent James Bond on the big screen, Bond fans and even those with only a passing interest should take the time to get to know Bond better. They can include re-watching the movies, but I suggest taking time to read the James Bond books.

Amazingly, there are more than 40 James Bond novels to read, including the original 14 written by Bond creator Ian Fleming.

Fleming died in 1964, and two of his Bond books were published posthumously. Subsequently, the Fleming estate has selected various writers to pen further adventures of 007. 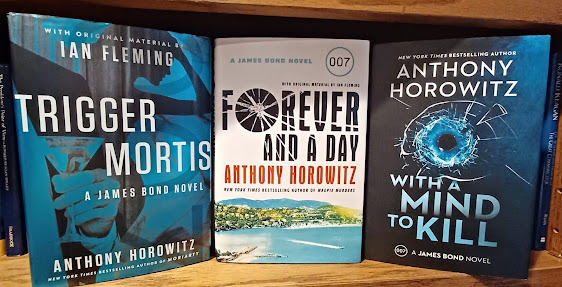 What one gets from the books that’s largely missing from the movies is a far more complete Bond, including his doubts, fears, internal reflections, his love of England, his past, his thoughts in unraveling mysteries, regrets, his perspective on death, and his assorted, at times surprising, desires. The books provide James Bond in full.

And that most certainly includes a Bond trilogy just completed by novelist Anthony Horowitz.

In 2015, Horowitz’s first Bond novel – Trigger Mortis – was published. With a few pinches of Ian Fleming material integrated into the story, we open the book with James Bond just after Goldfinger. This is Bond at his peak, and the author treats us to a great deal of Bond’s thinking on a wide range of matters, including evil.

Then in 2018, again with a bit of Fleming’s original material, Horowitz, in Forever and a Day, takes us back to Bond’s first mission as a double-0, not all that long after World War II. Here, we see Bond working to earn the job of being 007.

And finally, the recently published With a Mind to Kill, we take flight with a more experienced Bond in the 1960s. Being older and through a great deal more than most men could possibly imagine never mind survive, Bond doesn’t waver in terms of what he thinks about the job he is doing, even as the world around him seems to have queries and doubts. As for Bond, he has more questions about whether or not he, in particular, is still capable of being the person to do the job.

In each of the books, Horowitz ably combines plenty of action, with a mix of gravity, humor and alarm, as well as degrees of warmth and emotional depth. He not only excels at capturing Ian Fleming’s voice, but I couldn’t help but think of the Bond in these pages being played by Sean Connery. That’s a credit to both Horowitz, and, of course, Connery.

Each of Horowitz’s James Bond books – Trigger Mortis, Forever and a Day and With a Mind to Kill – deserve to be savored by readers.

But there’s more. As the Bond powers-that-be ponder who should play Bond next and what the stories should be, why not turn to Horowitz’s trilogy for some answers? Taking Bond back to the 1950s and 1960s would be a bold and marvelous choice. Well-done period pieces can be completely engrossing, and there’s simply so much more that Bond can do as a spy in the midst of the Cold War. Take the cue from these Horowitz books. Heck, take the stories from these books!

As for who should play Bond, well, there’s no direct answer from these books. But it’s rather easy to see that Henry Cavill has the right look and stature to play a James Bond of the 50s and 60s. (For Cavill, imagine a career marked by playing both Superman and James Bond!) I certainly would look forward to that first moment on screen, when a Henry Cavill Bond, in a tux, declares, “Bond, James Bond.”