Did you ever look forward to seeing a new movie with expectations that it would be a good or even great film? That was me getting ready to see the new film, No Time To Die, with Daniel Craig starring for a final time as Bond, James Bond. (See my take in the first four Craig Bond movies as preparation.)

If you answered “yes” to this question, did you then experience significant disappointment because the film came up far short of those expectations? Unfortunately, that was the case when seeing No Time To Die. 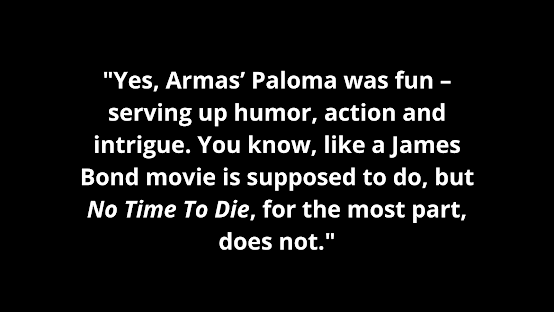 The stars seemed to be aligned for a wonderful send off for Craig as Bond. While the movie is visually alluring and had its moments story wise, alas, No Time To Die turned out to be heavy and dull, misguided in its handling of Bond and other characters, and in the end, little fun. James Bond is supposed to be fun, and this movie had only one truly fun moment.

Daniel Craig once again gave an excellent performance, but quite frankly, he was given material that wasn’t very Bond-ian. Craig took Bond to new heights in his previous performances, including serving up a grittier and more complex Bond. But it was still very much Bond. No Time To Die missed critical aspects of what makes Bond Bond and what makes a Bond film a Bond film. And final decisions made regarding this Bond were part well-worn tropes, part misguided, and ultimately, again, disappointing.

As for other major supporting Bond characters, Moneypenny (Naomie Harris) was under-utilized. Felix Leiter (Jeffrey Wright) returned back, thankfully, and played an important part in the story, but we needed more of him. And the Bond villains, mainly, Safin (Rami Malek) and Blofeld (Christopf Waltz), failed to stand out in this picture.

Tragic was the central role played by M (Ralph Fiennes) this time around, as the character made decisions in this movie that go directly against what he learned and was about in Skyfall and Spectre.

Unfortunately, Lea Seydoux came back as Madeleine in No Time To Die. Once more, the character was central to Bond’s story, but also was completely uninteresting. I cannot decide if it’s what Seydoux had to work with, her own shortcomings as an actress, or a combination of both.

But let’s get to that fun moment. Ana de Armas as Paloma was the bright spot in No Time To Die. The character was only on screen for a few minutes, but she stole those moments and gave off energy that provided a much-needed spark to Bond himself. Yes, Armas’ Paloma was fun – serving up humor, action and intrigue. You know, like a James Bond movie is supposed to do, but No Time To Die, for the most part, does not.