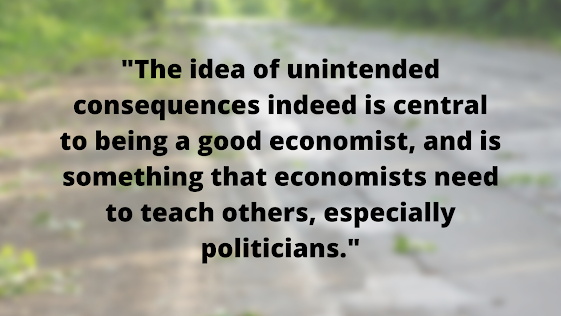 Frederic Bastiat was a leading economic and political thinker in the first half of the 19thcentury. He opened his famous essay “What Is Seen and What Is Not Seen” this way:

In the economic sphere an action, a habit, an institution, or a law engenders not just one effect but a series of effects. Of these effects only the first is immediate; it is revealed simultaneously with its cause; it is seen. The other merely occur successively; they are not seen; we are lucky if we foresee them.

The entire difference between a bad and a good economist is apparent here. A bad relies on the visible effect, while the good one takes account both of the effect one can see and of those one must foresee.

In day-to-day economics, Bastiat’s point is untidy in terms of nailing down numbers and estimates, but that makes it no less real nor does it mean that it lacks importance. Indeed, quite the contrary. Economists can wind up spending a great deal of time explaining the full effects of various actions, especially those effects not intended or of a first order, and especially on the public policy front.

In fact, as economist David Henderson noted in The Concise Encyclopedia of Economics: Among other issues, Bastiat “emphasized the unintended consequences of government policy (he called them the ‘unseen’ consequences). Friedrich Hayek credits Bastiat with this important insight: if we judge economic policy solely by its immediate effects, we will miss all of its unintended and longer-run effects and will undermine economic freedom, which delivers benefits that are not part of anyone’s conscious design. Much of Hayek’s work, and some of Milton Friedman’s, was an exploration and elaboration of this insight.” 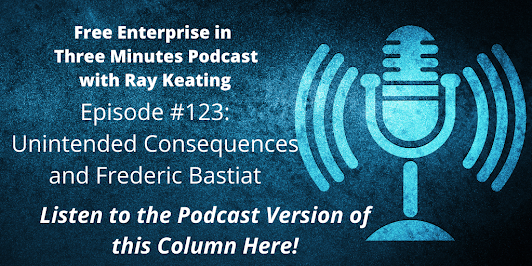 Email ThisBlogThis!Share to TwitterShare to FacebookShare to Pinterest
Labels: David Henderson, Frederic Bastiat, Ray Keating, The Concise Encyclopedia of Economics, What is Seen and What Is Not Seen